The  lord Sri Pidari Amman is believed that power of Shiva and Shakti, There is small idol of Lord  Shiva with Holy Ganga on his head under the presiding deity. It is an added reputation to the temple that besides the presiding deity, Brahmma Durga, Vishnu Durga abd Shiva Durga bless the devotees in this temple.

She is also known as Pitali, Pidaraksa, Pidari Bathrakali, Kala Pidari or Adanghaa Pidari. She is regarded as being a consort of Siva through being an aspect of Kali. Pidari is not just a village gramadevata but a goddess in her own right as Kali manifestation.

A six festivals are grandly celebrated in the temple in Panugni (March-April) and month of Aadi (July-august) is a festival day in the temple.

The devotees walk on fire pit for curing the illness on festival seasons.

Sri Pidari Amman Temple is located near by Thirunallar at Karaikal District, Puducherry. 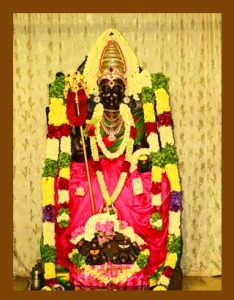