Sri Mazhai Mariamman is the South Indian goddess of rain, it is placed  at Keezhavur, Thirunallar at Karaikal District, Puducherry.

Festivities for her happen during the late summer, early autumn season of “Aadi”. Throughout the Tamil Nadu and deccan region, grand festival known as “Aadi Thiruvizha” are taken for Maariamman.

Her worship mainly focuses on bringing rains and It is believed by the devotees that the Goddess has enormous powers over curing illnesses and curing diseases like cholera, smallpox, and chicken pox.

The  Special Poojas are performed on Tuesdays and Fridays in the month of Aadi (July-August) with abisheks of all fragrant materials. 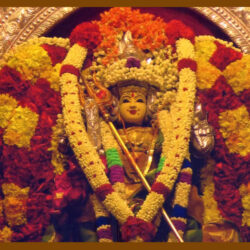